You might ask what is Va’a (we did)! Va’a is a Pacific Island word meaning canoe.

Our Year 8 Student Georgia Newton has been selected by AOCRA (Australian Outrigger Canoe Racing Association) to represent Australia at the 2016 Va’a Worlds Sprints on the Sunshine Coast in May 2016.

Georgia excelled at the National qualifiers in February this year, placing 4th in her age group in the Va’a sprint and performing admirably in U16’s.  She then earned two gold medals at national level in a composite team in U14 V6 races at the National sprint championships.

Georgia’s long term aim is to represent Australia at the world sprints in Tahiti in 2018. We wish Georgia every success with her ambition and eagerly await news of her achievements! 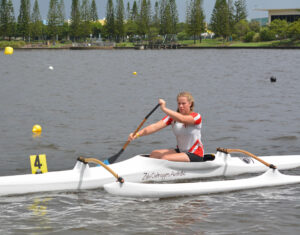