Year 10 student Hannah Williams recounts her experience at the Legacy Public Speaking Competition alongside Year 7 student Caitlin Ebsworth.
We walked through the seemingly ancient stone archway at the entrance of Albury High School for the first time. Neither Caitlin or I had much up our sleeves by way of public speaking experience, the only advantage I held was the number of debates I’ve participated in, but wasn’t confident this would be enough to prepare me for the Legacy Public Speaking Competition.
Prepared speeches in shaking and sweaty hands, we made our way up to the venue of the event to stretch our legs after the three hour drive to Albury from Moama.
Sixteen students sat just as nervously, also fiddling with their speeches, we breathed a sigh of relief; we had no disadvantage here, and we finally believed Miss James’ encouraging advice.
They called my name, and I walked up the aisle formed between plastic school chairs, there I stood, explaining stem cells and their potential as well as the cost of scientific research in general for five minutes to a dead silent audience. I sat down and was able to breathe again, a smile sneaking onto my face as I relaxed.
Caitlin was called to present her speech, which changed the tone to a light note, as was so desperately required, she followed speeches about abuse of women, and the tragic effects of bullying among other serious and heavy topics.
The breath of fresh air that Caitlin presented was about toilet paper, of all things! But it got a few laughs from the small crow of 30 at best, and thumbs up from other schools’ teachers as she made her way back to her seat upon finishing. She did very well, making the five minute bell and she was followed by an incredible speaker by the name of Luke, who spoke without cue cards, about the importance of freedom, imagination, innovation and knowledge, he captivated each and every member of the small audience. Another boy with red hair convinced us all that “gingers should rule the world”, this got a laugh and pat on the back as well. 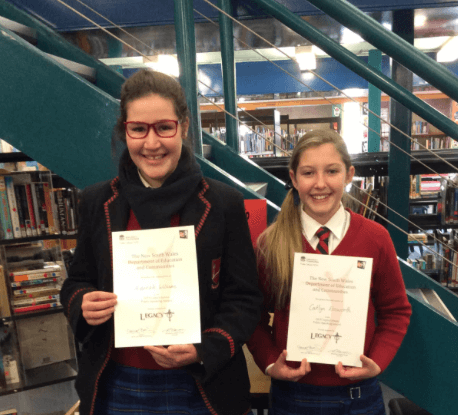 After a quick snack break, we were given our impromptu topics and just five minutes to prepare a two to three minute speech. “A book I have enjoyed reading,” the topic read, I was stumped to say the least. I’m sure Caitlin felt the same way, books and tales from Narnia and Neverland flooded my head, I cleared my head and wrote as much as I possibly could, trying to craft words in a way that would stand out from everyone else.
I spoke of the power of words and a book’s ability to transport a reader to another world. When the bell rung at two minutes I was free to sit down and stop pulling a speech out of thin air. Caitlin talked about “Hannah’s Suitcase”, a book she had studied in english, and shared her opinions on it and showed her love and appreciation for this book with a great speech, especially considering it was her first impromptu speech.
I received Highly Commended from the adjudicator, which is no small feat and had me quite excited, unable to hide a grin and hop in my step. First place, who will progress to the state level competition went to the young man named Luke. Caitlin did a great job, especially given her age and this being her first time, and much like my first competition, she will only build on her abilities.
Personally, the thing I enjoy most about public speaking is that is a way to give ourselves a voice, we can voice our opinions, convince and persuade people of anything we believe in, and stand up for those who can’t.
It also helps to build communication skills that will always come in handy, and really helps to build confidence, despite the nerves that we get before getting up and presenting our ideas, but perhaps these nerves and worries are simply because we are unsure of how the audience will react to our beliefs and opinions. This is exactly why its so important to voice these opinions to as many people as possible, to help change and shape society, we truly are our own future.
Hannah Williams