Year 8 student Lilly Holden impressed in Interleague representative netball at the weekend.
Lilly played on the wing in the Kyabram District Netball League Under 15s representative team, who won against Mininera 31-29 in Shepparton.
She was commended for her tireless efforts in wing defence throughout the hard-fought game, which saw KDNL come away with a 2 goal victory.
Well done Lilly! 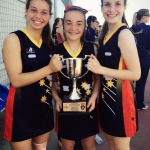