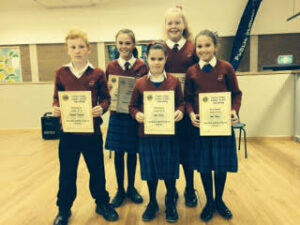 They spoke on world topics while ‘posing’ as experts in their field, which allowed for lot of creativity.
The students in Year 5 and 6 not only presented their prepared speeches but were also required to be involved in an impromptu speech.
They were given 5 minutes to prepare for this on a question related to sports and exercise. With only a short amount of time to prepare all students did themselves proud.
The winners were announced at the end of the competition, unfortunately Ella and Patrick missed out on a place but should be exceptionally proud of their performances.
Hannah and Cleo were also unfortunate to miss out despite speaking with lots of confidence and clarity, it was Georgina Gough who come through with the win.
Georgina will be representing Moama Anglican Grammar School this coming Sunday in the next stage. Good Luck, Georgina!
Miss Cathy James
Coordinator Public Speaking and Debating